Last year, we actually considered moving further south for a change of scenery and to be closer to the city of Seattle so we already viewed apartments in the Kirkland area however, moving sucks and we couldn't imagine packing and moving again so we stayed in Mill Creek.  Well when our lease was up and rent was raised by nearly $200 we couldn't stand the thought of paying so much to live so far North.  We were left with downsizing and purging a lot of our belongings to move into a smaller apartment.  Three truck loads of clothes, kitchen items, curtains, and randomness went to the Goodwill.  We brought only what we needed.  We got rid of anything that looked nasty including our only can opener that was rusty as shit.
We have yet to buy a new can opener by the way, instead using the spoon method to open up beans and corn.  I'm surprised we still have all of our fingers. 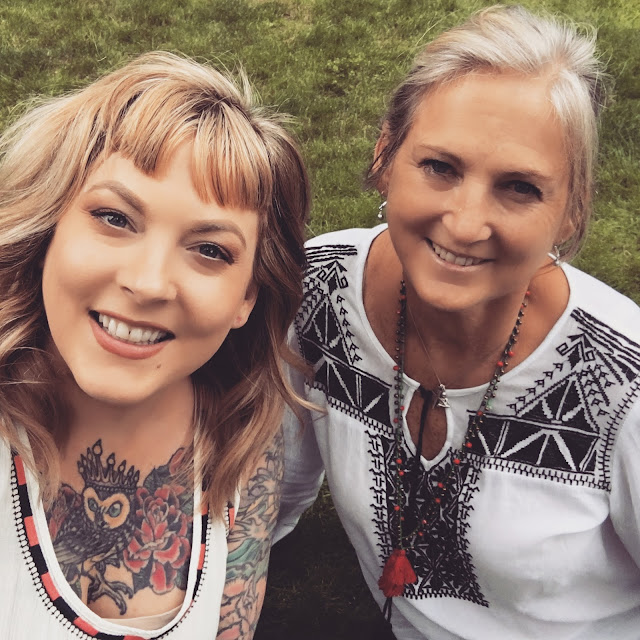 My mom arrived during our packing phase to visit and to help out.  She and my step-dad are trying to sell their house on one of the islands in Washington, away from their usual home in Mexico so I am lucky enough to have her for the summer close by! 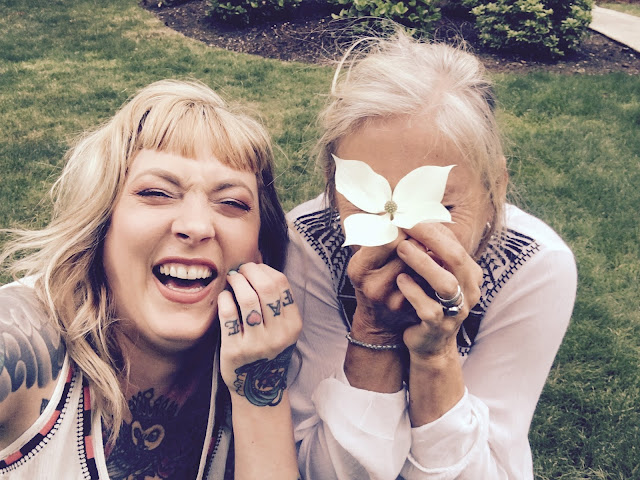 We went through boxes of memories and pictures and laughed so hard we cried...my favorite kind of mom visit. 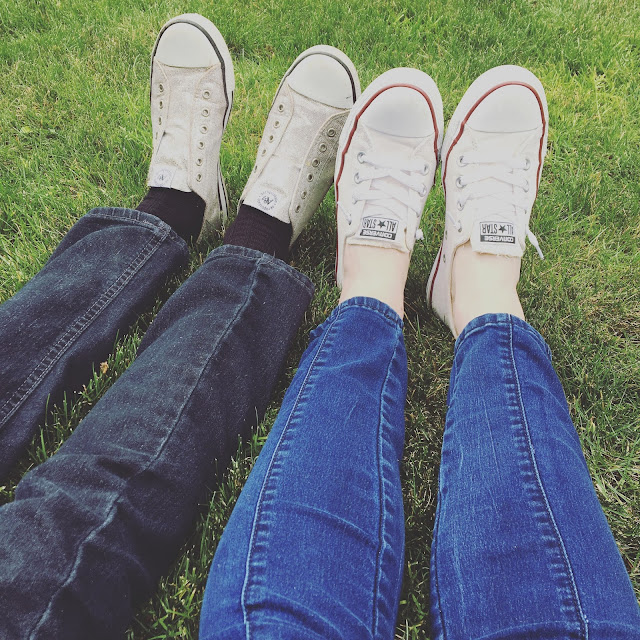 Our new home is cozy and perfect for the three of us.  We are settled in and things are starting to slowly feel like home again. 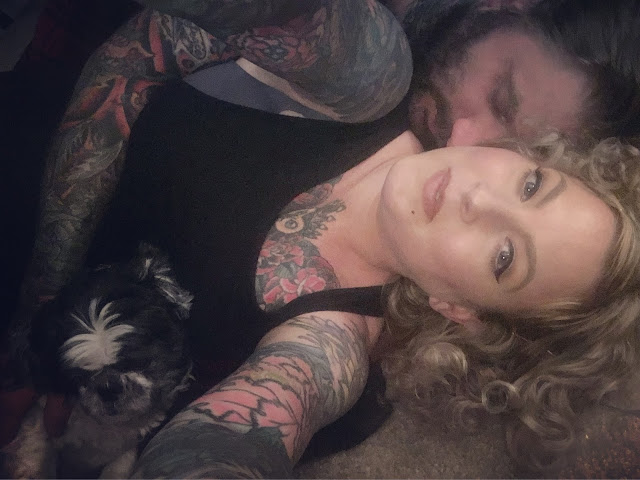 Booger seems to really love it here too. 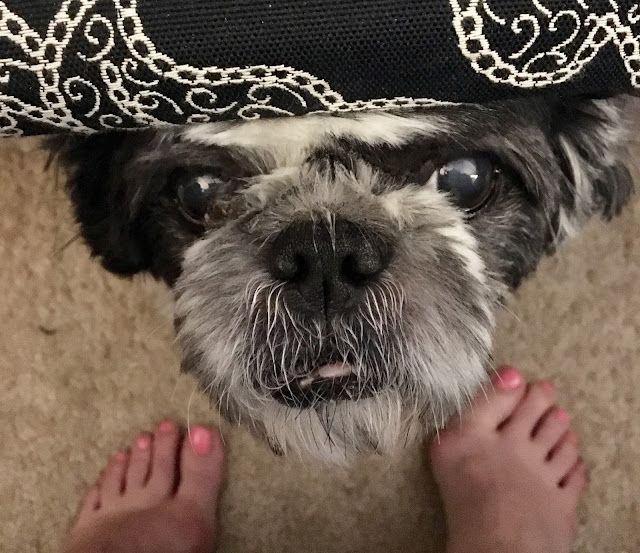 Our porch has no cover, just clear blue skies above us.  Early in the morning, it's my favorite place to sit, have coffee and breakfast with lil Boog sun bathing at my feet.  Summers are usually pretty mild here but can get hot on occasion.  Since we don't have A/C units in most apartments we have to get creative with fans.  We moved during one of the hottest weekends of the year so far.  It felt like a sauna in our place, being top floor doesn't help either.  I was sweating so hard I swear I could hear myself squeaking when I walked.

All that aside, I love our open beautiful patio in the trees. 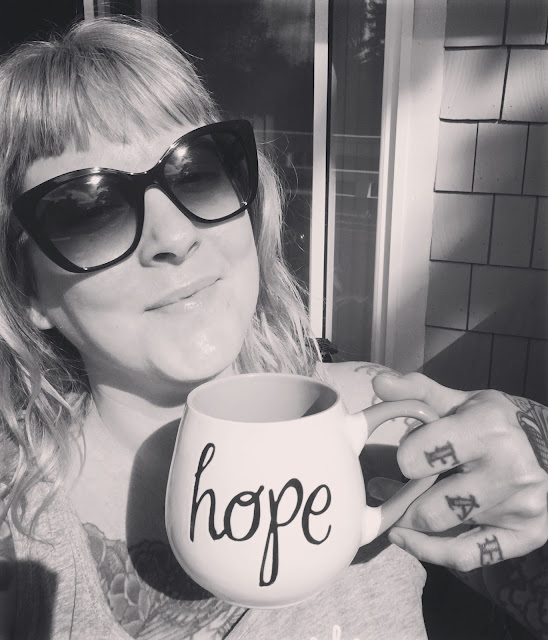 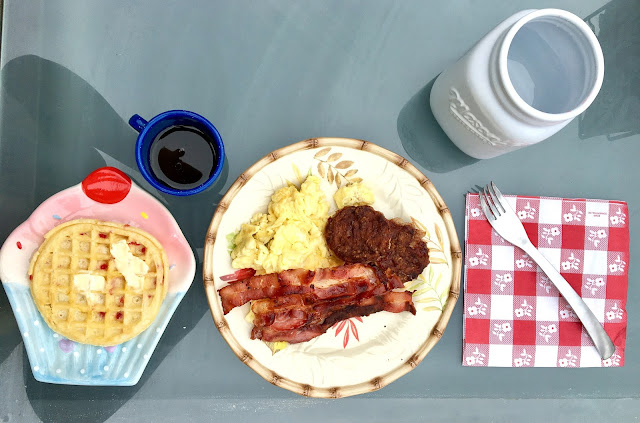 We are so close to Juanita Bay beach where we can stroll along the water and explore the trails to find lotus flowers, lily pads, ducks, and frogs.  A plethora of nature's goodness.  I tried to get the same shot below of the Lotus (Lyle took this) but he was afraid I was going to fall in.  For some reason, it is just known that "Seanna is clumsy" and WILL inevitably fall in... so don't even try.  I thought it was romantic he held out his hand to help me back off the log. 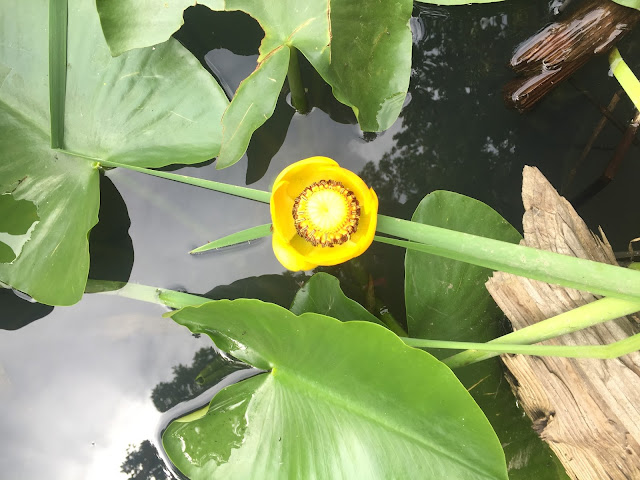 The fish and chips joint (Spud) has been calling me this whole time but I've saved it for a very special and rewarding day off.  They have fried halibut, cod and salmon.  Fried green beans, asparagus, even Twinkies!
Smells like trouble...delicious, sinful, guilty pleasure trouble. 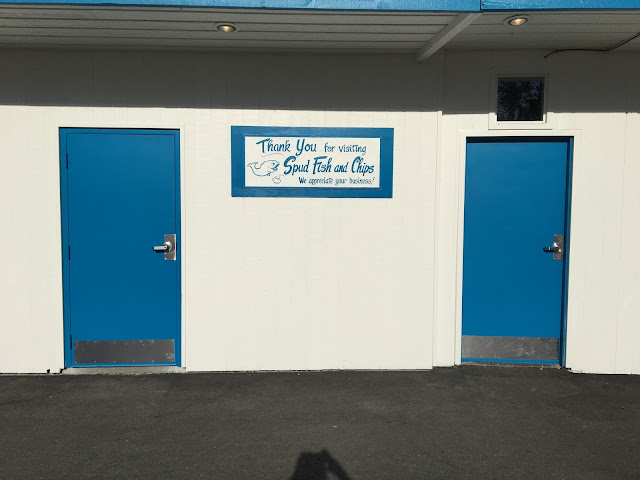 Floating on the lake has been one of the most relaxing moments I've had since the move.  I'm somewhat of a control freak in the sense that I have to be the one to unpack the house because I want to know where everything is.  So I've been exhausting myself getting everything just right.
Lyle was completely OK with this arrangement, ha.  His job was to hang the heavy stuff like the T.V., the new pot rack, and put the lights on dimmers.  It's so handy having an electrician around. 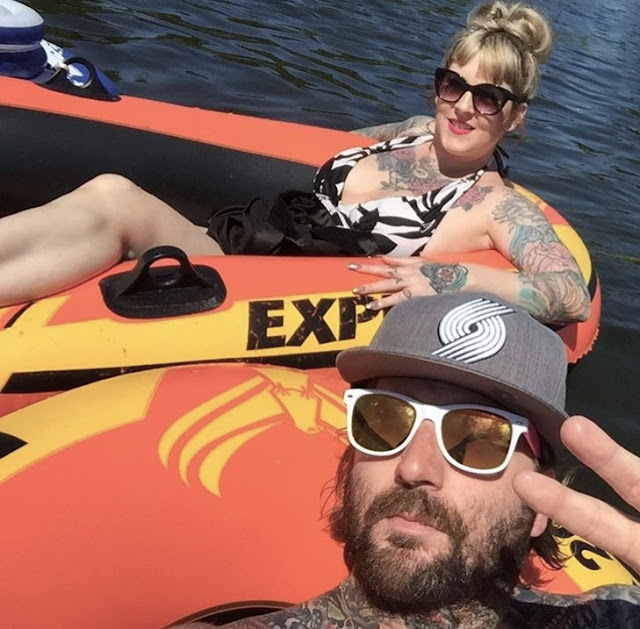 Royal India in my neighborhood has absolutely amazing food and live performances on the weekends.  My friend Heather is getting married this weekend so we met there to discuss the hair and makeup I will be doing for her and caught up after almost two years of not seeing each other! 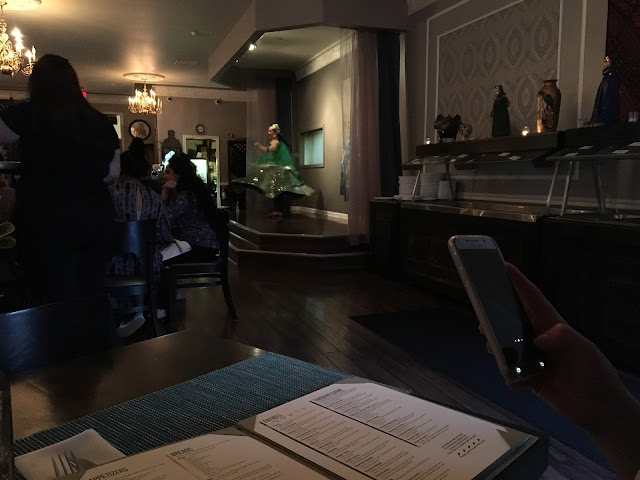 The pan seared Paneer and fig appetizer was SO delish! 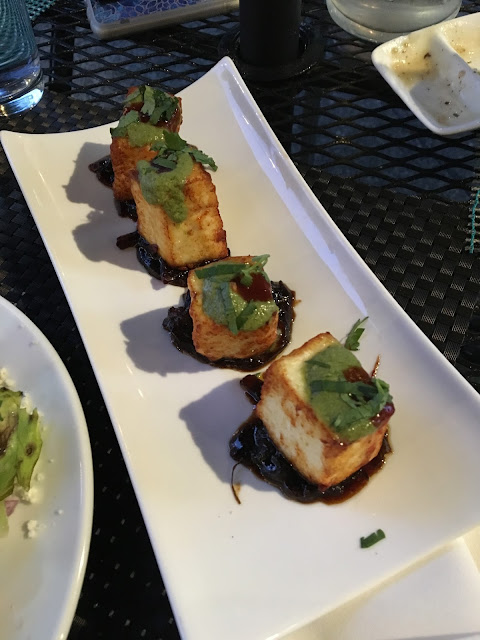 Lyle and I love taking a stroll to Top Pot getting coffee in the mornings and walking the pier. There is also an organic juicing cafe' I can't wait to check out, it's been closed every time I've wanted to go due to weekends and holidays but, "Super Detoxifier Juice" I'm coming for you. 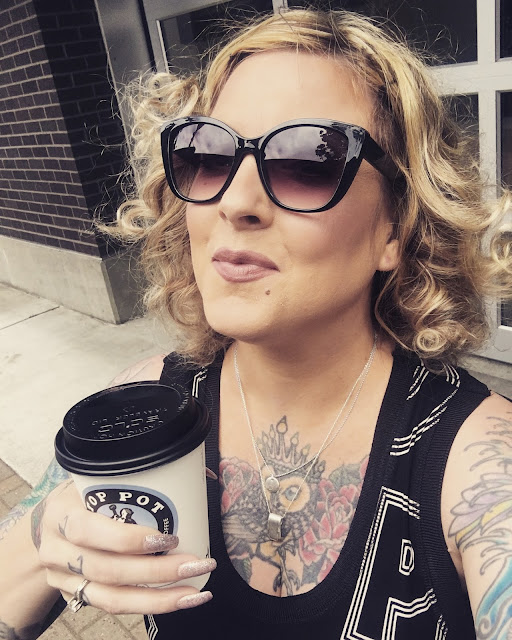 In my Ivy Park bodysuit that I'm LOVING.  Sunglasses are from Charming Charlie's.  "S" engraved necklace is from Tiffany's.  Nails are press ons from Sally's. 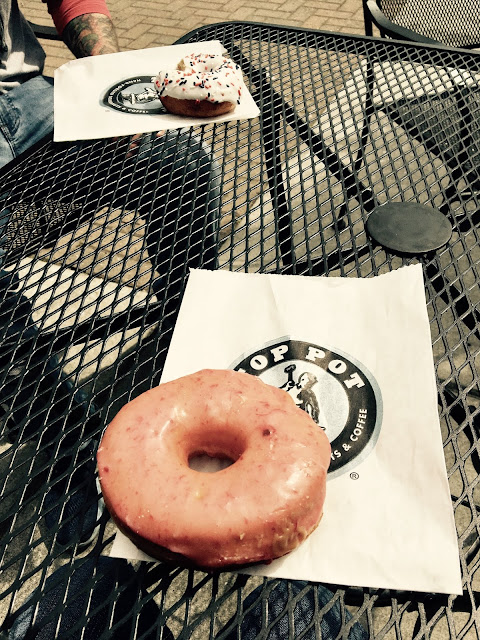 Lyle's 4th of July themed sprinkle doughnut and my raspberry one.  He got an iced mocha with whipped cream and I got a drip coffee with coconut milk. 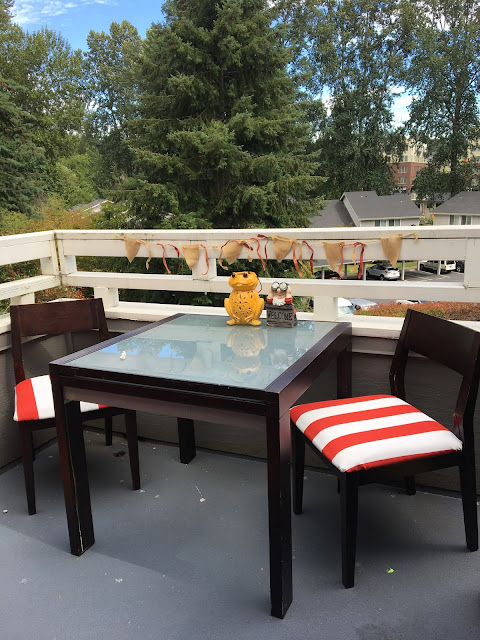 It's Fourth of July as I'm writing and posting this.  Earlier, I could see the city across Washington Lake where the fireworks will be going off.  We've tried the routine before of going into the city for the festivities and honestly the cab rides, traffic, and chaos isn't worth it if you don't already live conveniently closer to the city.  We used to live next to Lake Union for years where they shoot off the fireworks from a barge on the water and it was a breeze to go enjoy it.  This year, meh, we will have dogs and beers at home and relax.
Watching movies of the Earth being infiltrated by alien life forms. 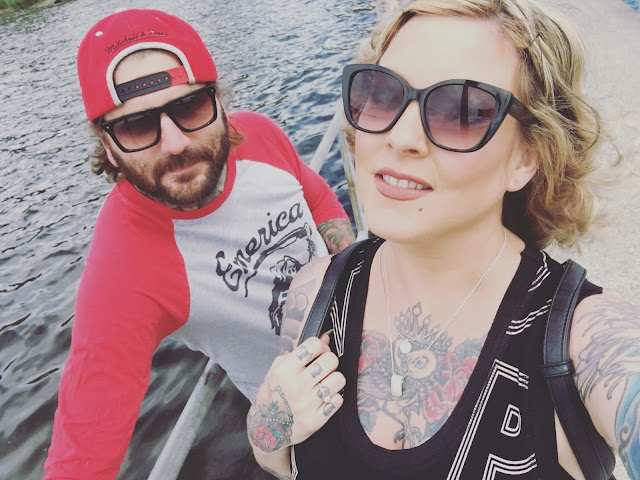 I don't know if it's the Pisces in me, but being near the water and smelling the fresh air off the beach has me inspired by my surroundings and looking forward to the life we'll be living out here in Kirkland.

To many amazing times and a great summer, cheers everyone!