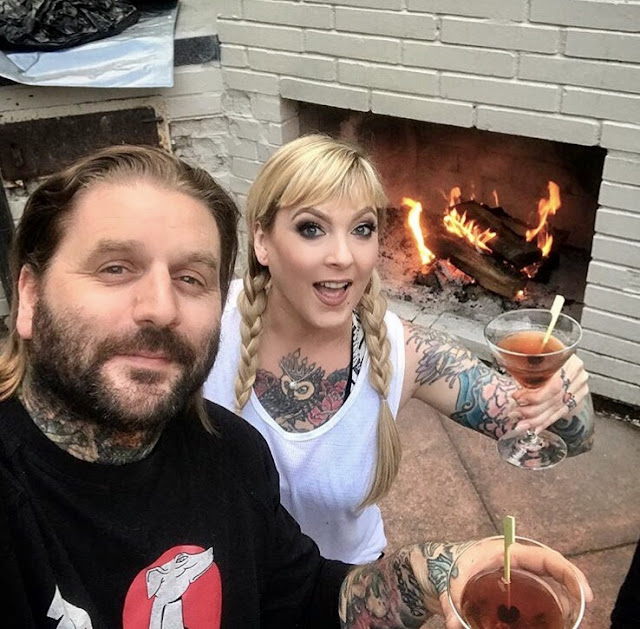 HOLY cow it's here.  It is so surreal.  The very first year Lyle and I were dating I remember riding around in his Blazer driving through the Fremont district.  It was a typical rainy dreary day in Seattle and I forget where we were going.  He asked me where I see myself in the next few years and I said, "Married to someone I love".  He seemed surprised I was so blunt but, I was just being honest with him.  It was the truth.


Our journey since then over the next six years went from fun dates and bouncing around downtown Seattle going to fancy restaurants, shopping adventures in Nordstrom, me bartending late into the morning with us being on complete opposite schedules, to moving in together and staying in more, moving three times, the Booger dog and Lyle not getting along at all to now loving each other and snuggling/snoring on the floor together.  Practiced giving each other some room to grow as individuals, forgiveness and understanding, each making lots of mistakes along the way but learning.  I will say it was all worth it, the good and the bad.  I can say I now truly understand how every single experience led us right to this point.

For the past 24 hours I have been looking down at my ring finger, in shock that it's for me and that this is real.  It feels like a dream, and I don't want to wake up from it.
Seriously, pinch me.  Wait don't...I bruise easily but gently squeeze me and tell me this is real will ya?

How it all happened~ 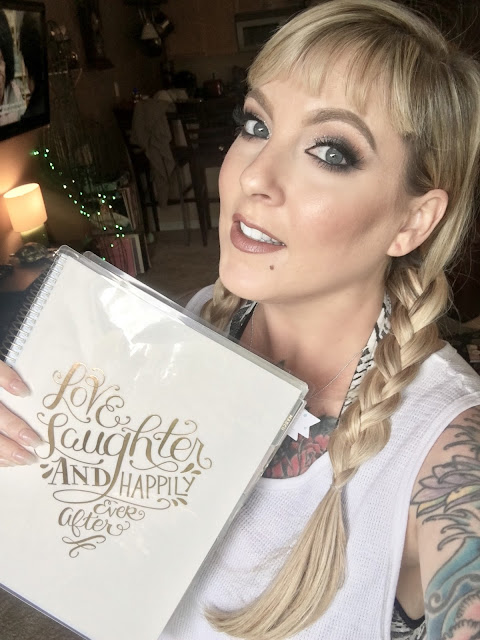 We walked down to our favorite spot next to Lake Washington on a late summer morning with Booger-dog in tow and sat on a bench by a pond, reflecting on our relationship.  We literally cried, hugged, laughed and all that sappy goodness.  That's when Lyle asked if he could show me the engagement ring designer he had been looking at for over a year now.  He wanted help with sizing and choosing which one because the designer had so many amazing options, he wanted to find the perfect fit.

When it arrived we walked back down to that same spot, the bench by the pond on a warm day just like before.  He got down on one knee with ring box in hand and made it official as we both laughed at how corny we were being. 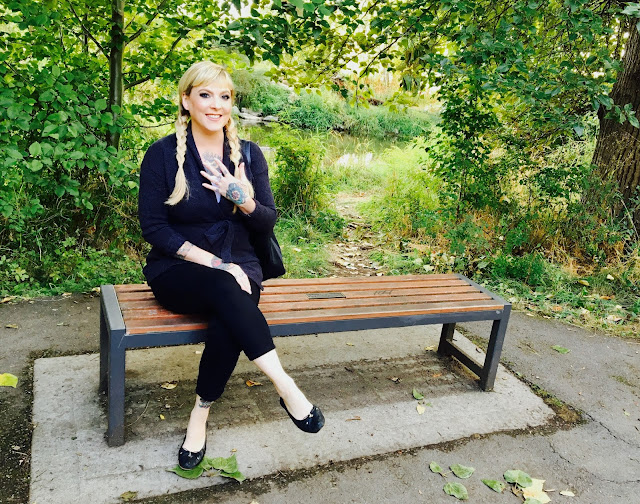 Afterwords we took about a zillion pictures throughout the nature path so we had plenty of share worthy photos.  We went over to the ducks that beg for bread like Oliver Twist, walked along the bridges over the lily-pads and frogs.  It was a majestic fairy wonderland, so much so you could just puke. 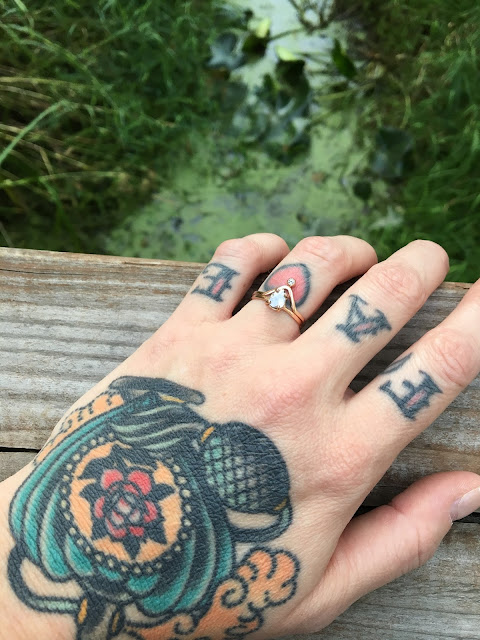 Then it was a stroll over to the local fancy pants restaurant called Cafe' Juanita to celebrate.
It's neat how the place looks just like you're walking into someones house.  They don't even have signs outside signifying that it's a business, an elusive rambler in the middle of a neighborhood with Rolls Royce's and Ferrari's parked out front handled by the valet dudes dressed in red and black tuxes.
It's one of those places where everything you eat and drink literally makes your taste buds tingle with excitement.  Your eyes roll back into your head so far you'd think they popped back around full circle. 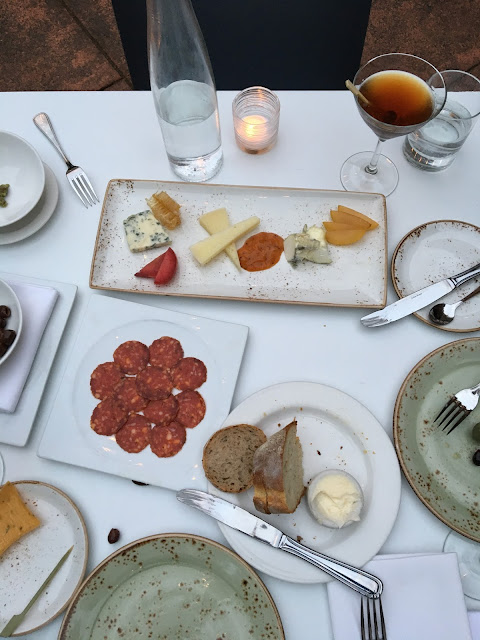 We went with the charcuterie plate with goat cheese, blue cheese, parmesan, salami, honeycomb, poached pears, a trio of three different homemade breads, and an olive bowl.  For the whistle, we had a couple of Manhattan's to celebrate the fact that it was also the first day of Autumn. 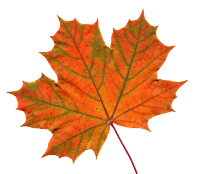 We chose to sit out back and luckily everyone was so intent on being inside the restaurant that they missed out on the perfect weather outside.  Hence, the two of us ended up having the entire patio to ourselves to goof off and nerd out in the privacy of our own candle-lit corner.  Our lovely server lady started the outdoor fireplace behind us and gave us blankets to stay comfy as the sun set.  The breeze was still warm but had a hint of Fall crispness to the air, pure nostalgia.  We ordered off-the-menu creme' brulee' which the server said they normally don't have but a regular guest of theirs had requested it for the weekend so we were in luck.  It's one of our favorite desserts and traditionally we both like to crack the sugar crust at the same time then dig in, fencing off each others spoons in a custard battle. 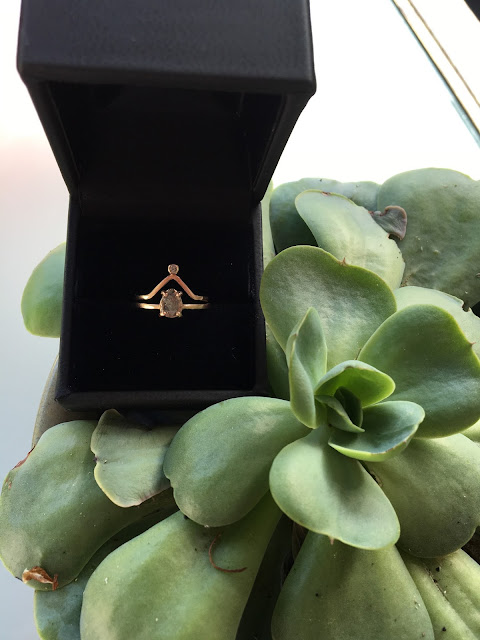 The ring was designed by Alexis Russell out of Buffalo, NY.

Lyle picked out the uncut stone, which is then cut and placed into your chosen setting.  This is a rose cut grey diamond, prong setting, with the extra stacked crown diamond to pair with it.  The bands are rose gold and the wedding band will be the third tier stack that goes under the diamond.
If you want to see the beautiful work of the designer here is a link . 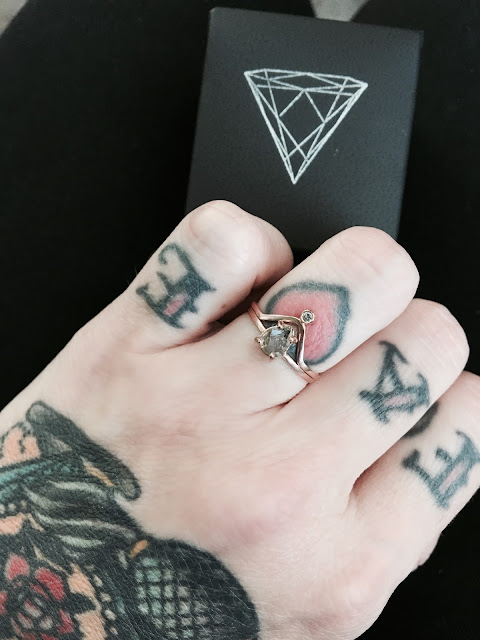 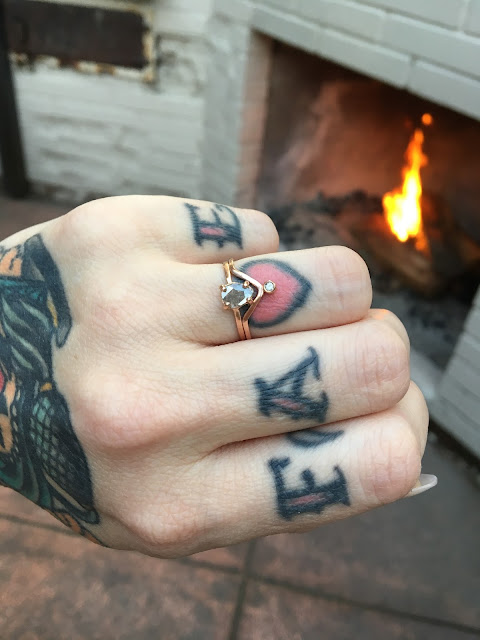 I also really like the message behind the diamond being Conflict Free and this certificate you get with the ring.  I'm sure you are already aware of the term "blood diamond" and have an idea of what goes on in certain countries with diamond mining supporting wars and if not I invite you to
Google it. 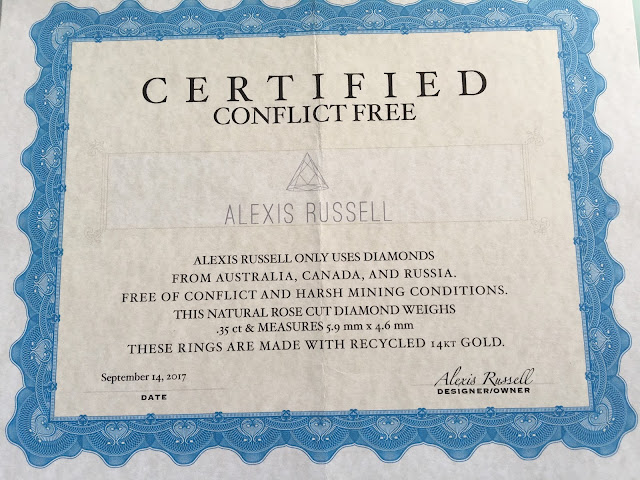 So that's our story so far! 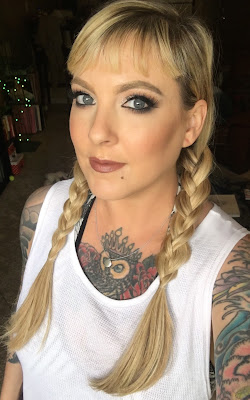 I'm already having so much fun planning the theme, decor, save-the-dates, and all the videos I plan to make regarding the preparation over the next seven months.

The wedding will be a small Canadian lakeside dream in the mountains with a guest list of under fifty or so people.  I'm considering wearing combat boots with my dress if that tells you anything.

Stay tuned! I'm sure I'm going to plaster my Youtube channel, blog, and socials with all sorts of wedding themed obnoxious behavior!

The Soon to Be Sutton Family
Seanna, Lyle, & Booker 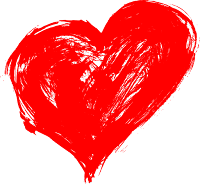 Here is the vlog from this weekend!