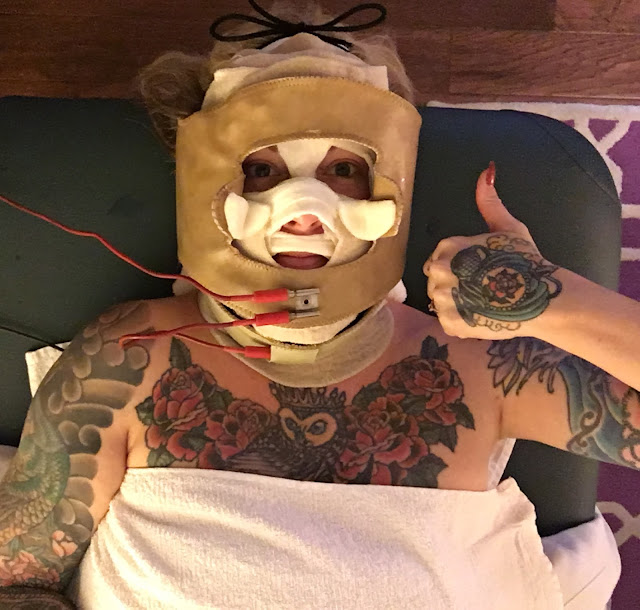 What have I gotten myself into this time??  😂

I was contacted by the owner, Jody, of DermaSpace in downtown Seattle to do a vlog about their strange but beneficial electrotherapy facial and I could have jumped out of my seat when I saw the email.  What an amazing concept and being the adventurous gal that I am,
I said "OF COURSE I will let you hook me up to an electrical current and attach it to my face."

This treatment has actually been around for a really long time and is even used with athletes to help work topical aid into their sore muscles.  Makes sense that you could do the same with skincare remedies for your face.  Celebrities have discovered this treatment and it is widely used in major cities like NY, LA, and now Seattle!

Jody started out with a gentle face cleanse and exfoliated then brought this sucker out you see below.  Most people don't watch the process live as they are getting it but since I was balancing my camera on my stomach I could see the viewfinder the whole time and I couldn't help but giggle.
I looked like a Teddy Bear. 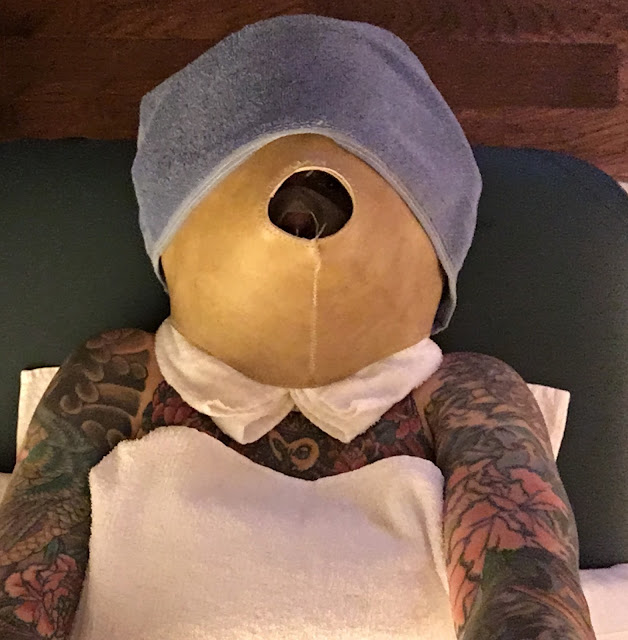 This cone was actually around back in the 1930's.  I relate it to the concept of putting a towel over your head then standing over hot water to steam.  This is great for opening pores and assisting with cleaning them out.  So the cone essentially "steamed my face" and I tell you what, it smelled reaaallly good in there and was quite relaxing!

I was so thankful to be in an environment where my filming not only wasn't awkward but invited so I got to play with different camera angles and such.  What a relief! 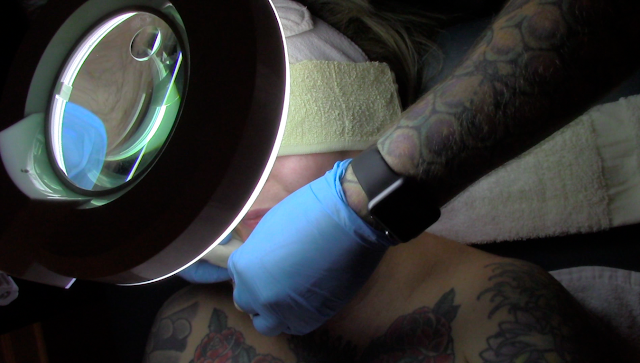 After 15 minutes the cone was removed and he used a very small vacuum device as well as a rolling technique on any problem areas I had to extract the dirt below the surface.  I always pack on so much foundation on my nose since that's (unfortunately) the one place I sunburn the most so the skin won't cover with just one layer of foundation.  I feel that I really have to pack it on, hence, more dirt/foundation/product jammed into my pores.  I've noticed little specks on the tip of it and it always bothered me.  This part actually did hurt just a tad because it was my first facial and grrrrl, my skin was capital D-i-r-t-y.

Next, you will see why this process is actually known as
"The Hannibal Lecter Facial" 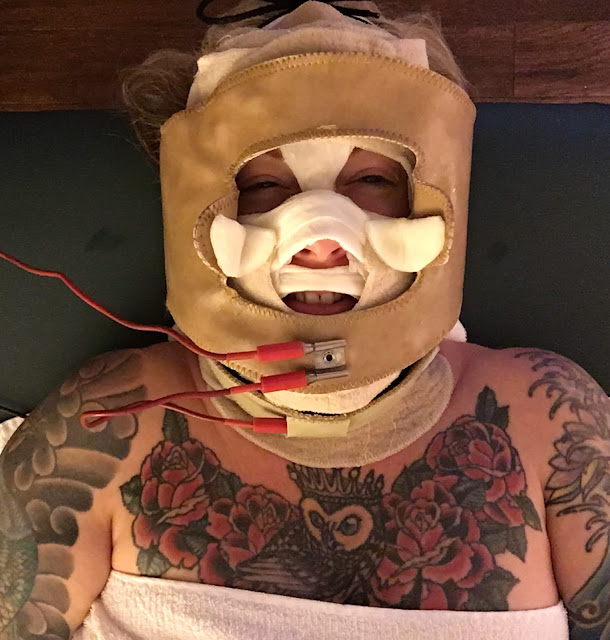 The machine goes up to a level 10 but newbies start at about a 1 or a 2.
He did try a little tester to see how high it would go before I felt anything and I got to a six before I said, "Oh yeaaah I feel it"  I thought I really was dead inside for a second there.

Light tingles vibrate throughout the face and I could visually see my heart beat pulsating the ceiling.  That's how I knew the blood was really circulating and made me think, "MAAAN I'm going to come out of this thing like I took that youth serum on Death Becomes Her!!"

I sat for about 20 mns and just relaxed in thought, enjoying the music. 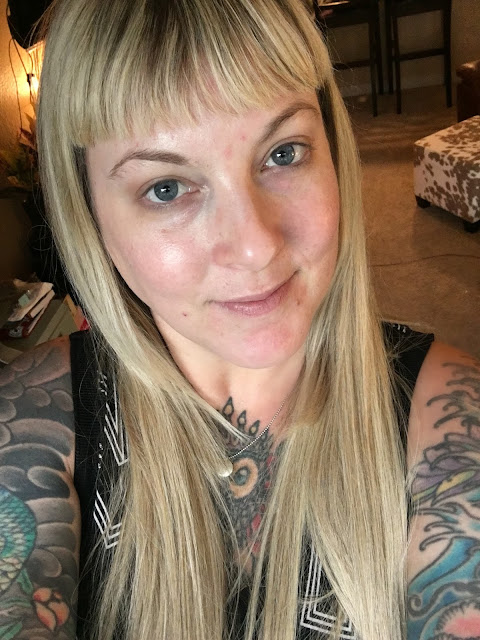 The feel of my skin afterwords was UNREAL.  It's hard to explain but it was like someone else's skin.  I didn't recognize the feeling of it with my fingertips.  It was a little red like Jody said it would be and I had a few spots where there were more focused extractions.  The little brown dots on my nose, all GONE!  I almost don't want to wear makeup at the moment; I just want to enjoy my young looking and feeling skin for awhile before I go slapping on my usual spackle.

So I have an entire video I made of the experience and I would love for you to go watch and give it a big thumbs up.  Giggle along with me.
Also, Jody has mentioned that he isn't taking any new clients but has three estheticians in his office that would gladly provide this exact same service plus, new clients get $15 off their first visit!
If you go let them know I sent ya!

You can get more info on their website here DermaSpace.
The office is located in downtown Seattle next to Nordstrom.